STOP THE DROWNINGS IN THE AEGEAN SEA, TEAR DOWN THE EVROS FENCE 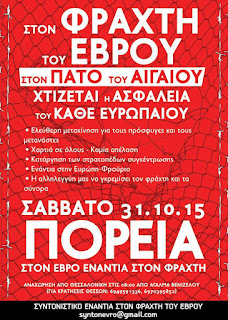 Every day, thousands of people persecuted by the bombings of the West, totalitarian regimes and fundamentalist violence, eradicated by extreme poverty and the “growth” of corporations struggle to cross borders and come to Europe. They are led to a fight for survival, in search of a life in peace and dignity. Thousands are drowned at the coasts of the Mediterranean; those however that manage in fact to reach European states alive come face to face with detention camps, fascist and racist attacks, police violence and profiteering, serving as cheap and easily exploitable workforce.

All by hypocritically invoking their alleged humanism, the leaders of Europe focus on reinforcing guarding at the borders, increasing the army and Frontex, detention camps, deportations and forced returns, thus revealing the true face of Fortress- Europe.

The fence in Evros (at the border between Turkey and Greece) is not only the symbol of exclusion, demonization of the “foreigner” and the protection of national and European security at all costs, but also the cause that all these people have drowned in the Aegean and the Mediterranean Sea. The fence forces refugees and immigrants to follow the perilous sea routes to cross borders. Evidence shows that ever since the fence was built, people drowned in the Aegean have skyrocketed and will continue to grow, considering that no barbed wire could stop a man or a woman that fights for survival and a life in dignity.


We have created the Coordination against the Evros Fence to tear down the fence, open borders and stop human tragedy in the Mediterranean. Groups and individuals have met to join our forces, each of a different ideological background, united by the common belief that stopping the nightmare of blood-stained borders is a matter of the society and the movements. Assemblies of the coordination team are open and horizontal in a direct process that pursues coordination and cooperation with similar initiatives both in Greece and abroad, considering that the question of borders concerns us all.

We cannot be silent facing death. As long as the fence is there and the borders are closed, the Greek State and the European Union will be committing the killing of thousands of immigrants and refugees at the coasts of the Mediterranean that die inside the wrecked coffin ships of traffickers in human beings.

We are therefore calling you to a mobilisation, a demonstration in Evros against the fence and the borders, on Saturday, October 31st, 2015.

Bus departing from Thessaloniki at 08:00 a.m. from the Statue of Venizelos 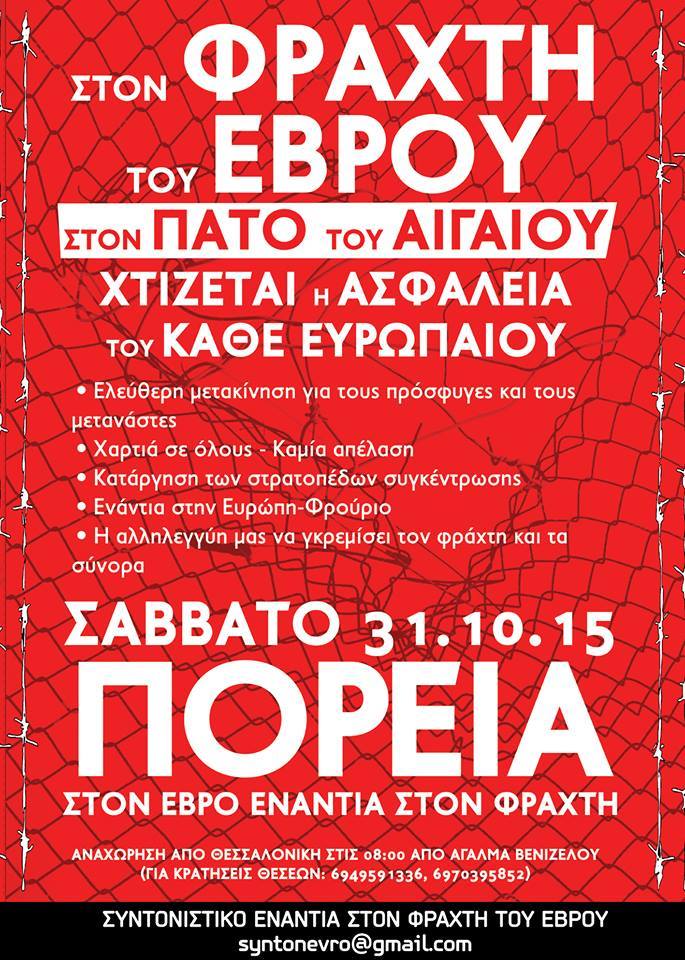